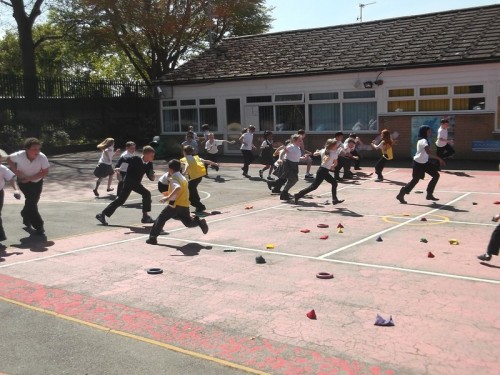 As it was a beautifully sunny day, we took the lesson outside. Miss Sloman turned the playground into a biome. We learned that this is part of a habitat. Then she placed hoops around. These represented the safe places for prey to hide, like up a tree or in a whole.

The aim of the game was to collect as many bean bags or hoops as possible. These represented food and energy. At the end of the game, anyone with less than 3 was dead as they had starved. This meant the prey needed to leave the safe hoops in order to stay alive. However, in yellow bibs were the predators, the carnivores. If they caught you, they got to keep your ‘energy’. This is to represent the food chain and the chain of energy. After a while, some top predators were added in red bibs. This meant the predators also had to be careful now.

We also learned the importance of habitats. Miss Sloman came along with her ‘chain saw’ and got rid of the trees (hoops). Many more ‘prey’ were caught as they had no safe place to hide. This represented deforestation which we learned about last term. We had an excellent time and learned lots.

4 thoughts on “Predator vs Prey”