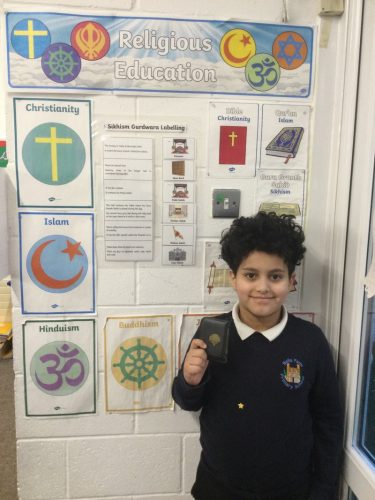 Today year 4 looked back at last week’s lesson on religions, their places of worship and their holy books.

This week we took some time to look at some Holy books. We had a few copies of the Bible. They were beautiful to look at and interesting. Some were written in older English and other a little easier to read. We also had a children’s Bible in the classroom, which had some bible stories in that were even easier to read.

We also had a couple of copies of the Quran. They were written in Arabic with English translation and meanings. Arabic is written from left to right unlike English, which is right to left.

The children enjoyed reading the texts and wanted to read extracts from both the Bible and the Quran.
Impressively, Lexi knew exactly which story she wanted to read out and Dehwa knew a section of the Quran of by heart. He was helped by Ibrahim to start it off in the name of “Allah” God. Blessed read a very difficult passage, which had a lot of names in- good job Blessed.

Have a look at them in action.