Hope everyone is enjoying their summer holidays. (Don’t forget the summer reading challenges!)

It’s been a wonderful year and below are some lovely photo’s taken by you on the last day!

Robins! If, like us, you have subscribed to the free Poppy and Lord Ted newsletter, you too will have received the first editions…featuring Bells Farm and you Robins!
Newsletter July 2021
It is clear Tim (as we now know TM Jorden) was as impressed with you all, as we were. You really made an impression. 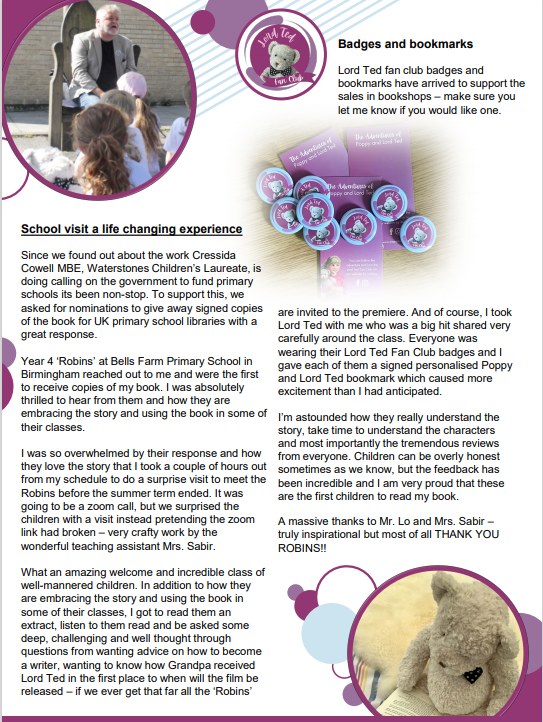 What a wonderful way to start the summer holidays, a full page on TM Jordan’s newsletter.
Well done Robins.
Stay safe and enjoy the summer.

Last Week Robins made some predictions about a new book.

Robins were very surprised when the Author T.M Jorden came to visit them!

On Monday Year 4 Robins we’re excited to be having a Zoom call from up and coming author Mr TM Jorden!
Having been given 5 signed copies of his debut novel they had devoured them and were eager to see him and get to ask some questions!
Mrs Sabir had read the first chapter to the whole class and soon Robins were speculating as to what would happen next! Those in the class who had begun to read it, as well as Lexi who had read all 200+ pages in 2 night, were beaming with positive reviews.
Robins had written letters to Tim (TM Jorden), blogged on the website, visited the Poppy and Lord Ted website, baked some of the recipes and written reviews. Not to mention while appraising work by the musician Gustav Holst, decided that his works named “Planets” was perfect for certain characters in the book!
Mr Lo and Mrs Sabir couldn’t be prouder of the effort and enthusiasm Robins have put into this, just from reading The adventures of Poppy and Lord Ted- The first summer.
Having a chance to speak to Tim was a real treat…
Until the Zoom had technical difficulties and Mrs Sabir disappeared to try and sort it…..
returning… behind…. TM Jorden himself!  Just outside Year 4 Robin’s classroom!
What a huge surprise that was! And in his backpack was Lord Ted himself!!!
Robin’s welcomed Tim and Lord Ted.
Tim (as we now know him) was wowed by the class and their letters, got emotional over how beautifully some of the children read extracts from the book .
We also showed him our passion for reading. See below for a clip of us reading.
We were all blown away with the question and answer session too! Look below for a short snippet.
Not to mention how impressed he was by lots of the children’s handwriting!
Rocking Robins you deserve all the praise.
A huge thank you to Tim for coming in and giving up so much time to talk to, inspire and listen to everyone.
Everyone who has read it, loves it and the rest will be reading it as we return. Can’t wait for more in the series… 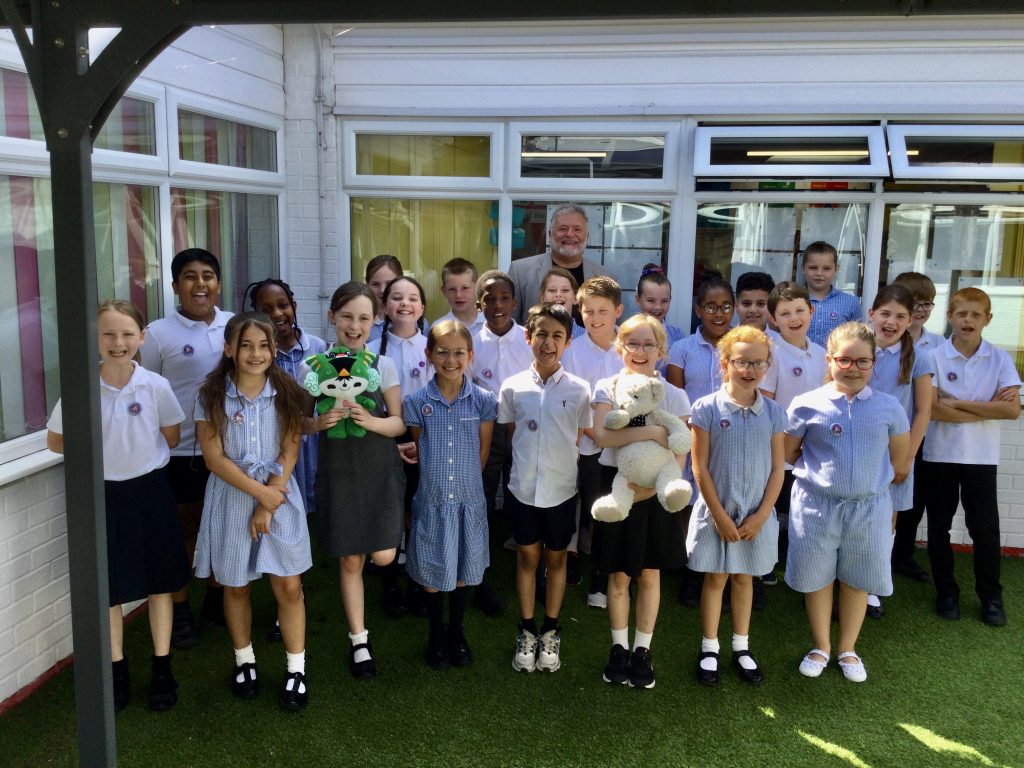 Robins made use of their creative skills, working together, perseverance and concentration.

They have made their own actions to the Euro 2020 theme tune. Hope you like it!

Robins enjoying all the creative artwork by the whole school! Well done everyone.

Robins have been very excited this week. They are the first pupils to read an extract from a new book , “The Adventures of Poppy and Lord Ted”

They then made predictions.

After that, Robins wrote persuasive letters to persuade TM Jorden to come visit our School. 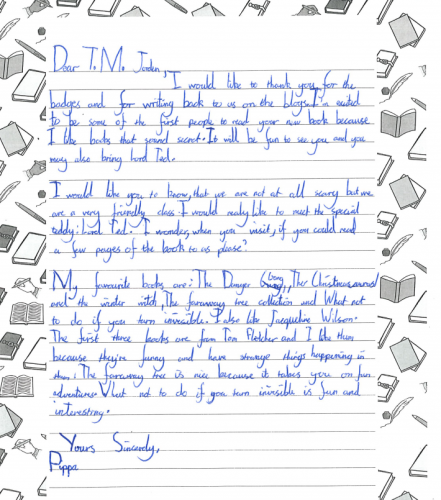 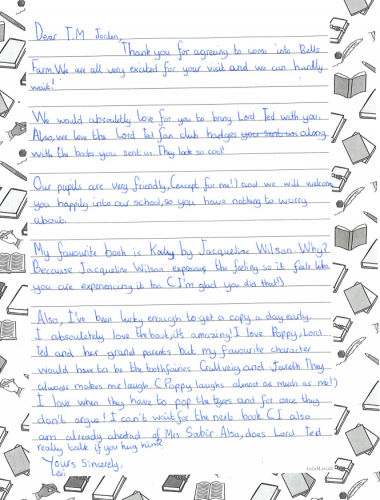 and guess what! The Author TM Jorden personally gave us 5 copies of the new book! 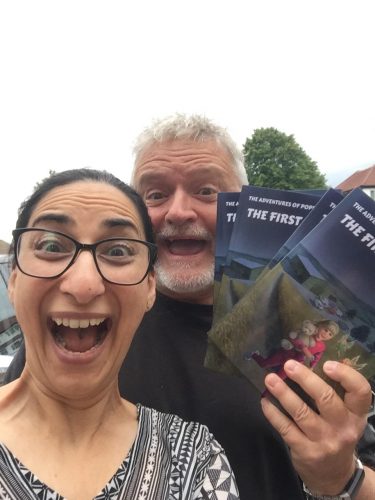 I wonder whether he will come next week?! 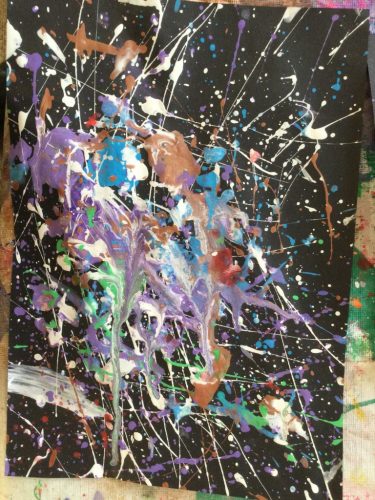 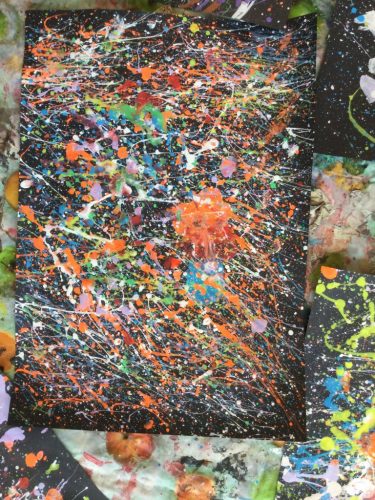 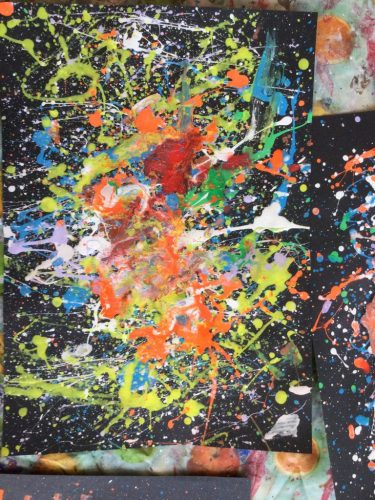 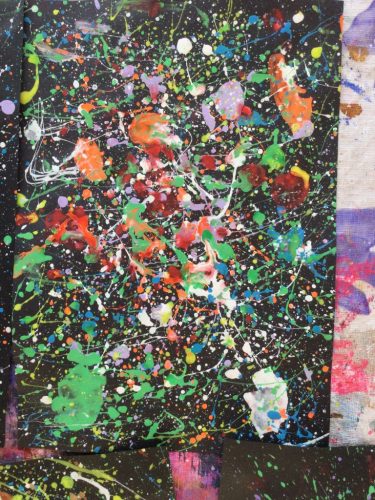 Look at us putting our thoughts onto paper as we are listening to the pieces!

Next we were introduced to Jackson Pollock – an influential American painter, and the leading force behind the abstract expressionist movement in the art world.

Having been inspired by Jackson Pollock. Robins had a go at making their own pieces of art using the paint flicking and blowing techniques to show stars, planets and galaxies.

Extension: Listen below to The Planets – Gustav Holst

Gustav Holst was a British composer best known for his orchestral suite ‘The Planets’. A suite is a group of individual pieces. There are seven pieces in ‘The Planets’ and ‘Mars, the Bringer of War’ is the first one.

In ancient Roman religion Mars was the god of war. Holst composed this piece in anticipation of the outbreak of World War One. It’s a march but an unusual one. Normally a march has 4 beats in a bar so you can say “left, right, left, right” but Mars has 5 beats in a bar; tricky to march to!

Robins used their creativity to imagine what the music could represent.

They also had a go at some of the percussion instruments. We look forward to making our own “War” music later in the week.

Today, Bluebirds had their chance to visit the Robins classroom; a sneak peak into their journey into Year 4!

Many were super brave in the morning, coming in with a big smile and saying, “Hello, Mr Lo!”

The first activities included discussing their top 3 positive affirmations, introducing themselves and discovering the classroom. 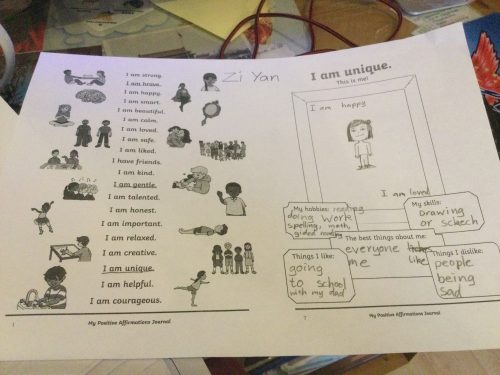 Mr Lo also mentioned in Year 4 we have a whole class target to improve our handwriting. Everyone has an opportunity to receive a pen licence if they take pride in their handwriting. 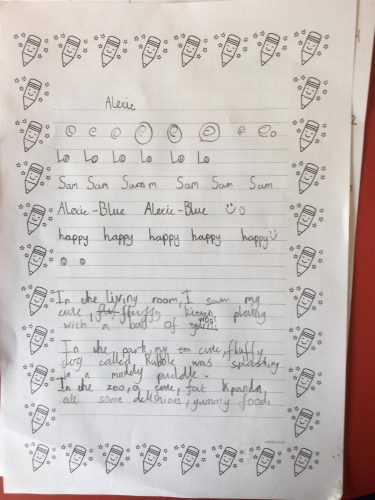 Next, we had a go with our times-tables. Bluebirds all worked well and showed Mr Lo they could use TT-Rockstars and Purple Mash to support their learning. 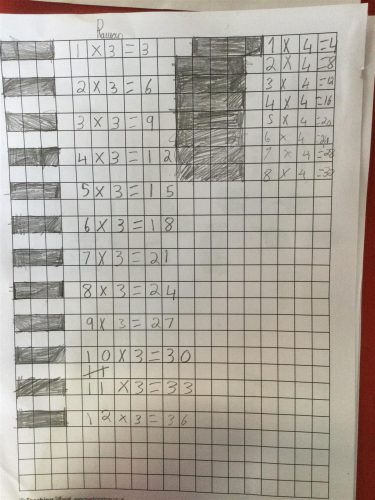 In the afternoon, Bluebirds had some time to do some independent reading. This allowed them the chance to explore the wonderful books we have.

This was followed by a game “Me too!” The aim of the game is to reinforce the value of friendships and understand that we all have things in common with others in our class.

Here are some of the things we have in common:

We are good at Gymnastics (Daisy, Imogen)

Next, we sat in a circle and said something positive about each other.

Examples of what was said about the person next to them include:

Finally, we wrote our aspirations on the leaves.

Recently in Maths Robins have been learning about Position and Direction. 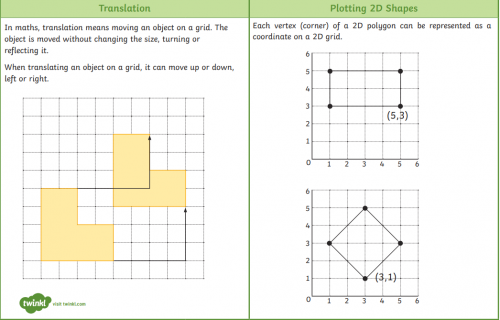 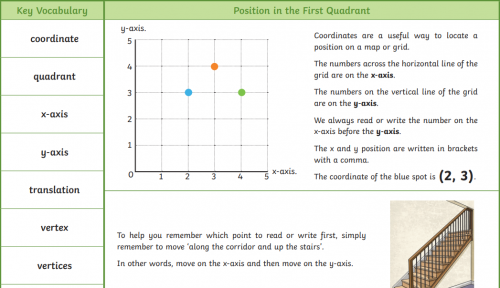 All of us did very well! Well done. 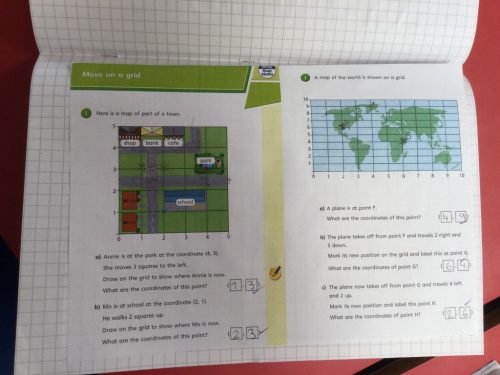 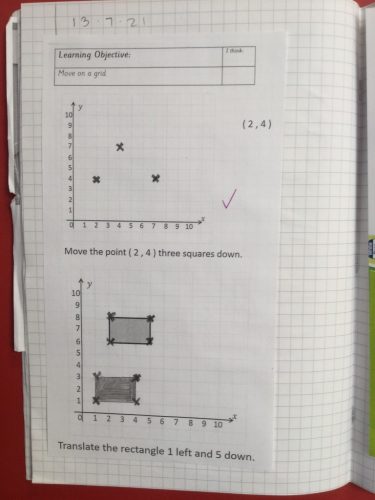