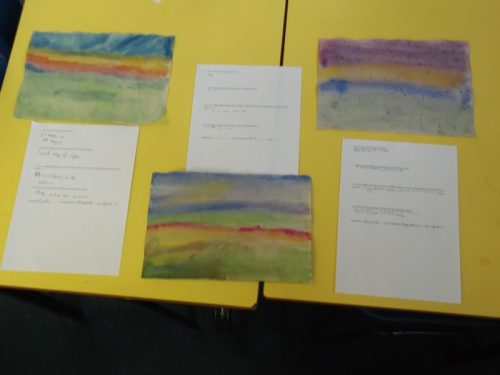 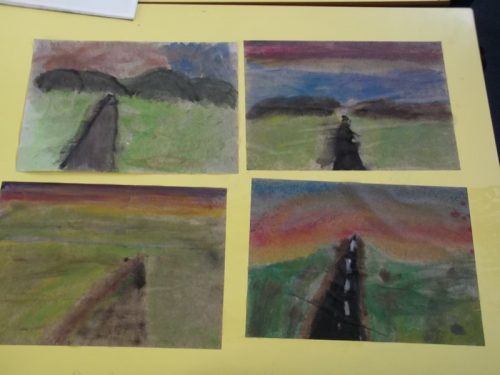 Today, Robins were reflective about their current Art topic to date. They discussed the importance of giving
feedback to their partner in a positive and constructive way, to help them rather than offend them.

They talked about being respectful of each other’s individual style, celebrating individuality and diversity. This linked nicely to the two artists we have looked at in our study of landscapes. David Hockney and Heaton Cooper both painted landscapes but their interpretations are completely different!

We tried to give one another specific praise and celebrate our successes together.

Here are the questions:
1. How does the painting make you feel?
2. What do you like about the painting so far? (What went well)
3. Can you suggest anything your partner might consider to improve and develop the art further?
4. Can you share any good tips? Eg How you got a particular effect? (Even better if…)

Congratulations to these Robins who all completed their number clubs this week:

Today, Robins have been learning about a famous inventor to create a fact file.

They were asked, “What have you learnt about Thomas Edison?” 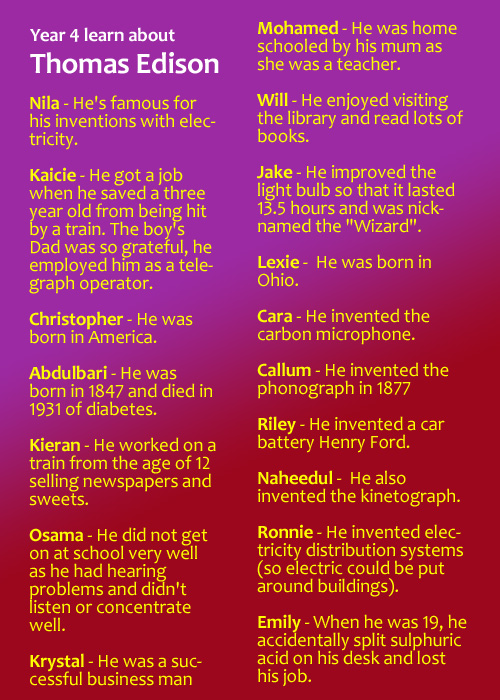 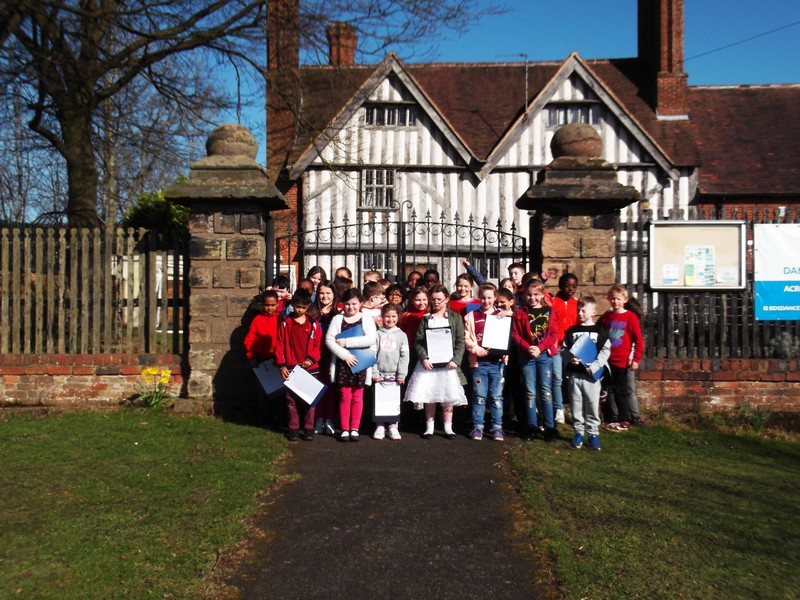 On Friday afternoon, Robins visited Bells Farmhouse to found out more about the history of this fantastic Grade II listed building, quite literally on our doorstep!

They had a tour around all the rooms, beginning in the Primrose room after a climb up the steep stairs! Robins were careful whilst climbing the narrow stairs and were inquisitive about every door and room! As Robins are currently writing warning tales in English, they thought this might be a good place for the story setting! There were lots of exposed beams in the timber building and quite a few fireplaces too. Some observant pupils spotted the window frames were alive with ladybirds. There were lots!

Robins found out that Bells Farmhouse is a 17th century Grade II listed building, originally having a hall, best parlour, brewing house, cellar and several fireplaces. It was owned by the Field family who were thought to be a wealthy family.

In the 1980, fires were started deliberately by vandals which gutted the interior and damaged the timber. In 1988 it was the winner of the Country House awards and was presented with an engraved glass bowl by the Earl of Caithness.

Today, the farmhouse is well used by many members of the community for courses, teaching, meetings, church , activities and clubs.

The children were treated to squash and biscuits before being allowed to look at lots of old photographs of the building over various time periods. They also saw a watercolour painting of the building and made links to their current Art lessons!

Today, Robins have been learning about circuits in their Science lesson. They were eager to use the equipment and experiment in making a successful circuit, to make a light bulb work. Lots of children worked independently, thinking carefully about what was needed to make the circuit work. Robins displayed excellent team skills all working together and helping each other. 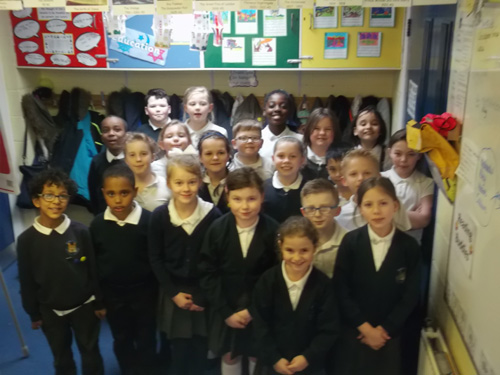 These fantastic Robins all completed their number clubs this week: 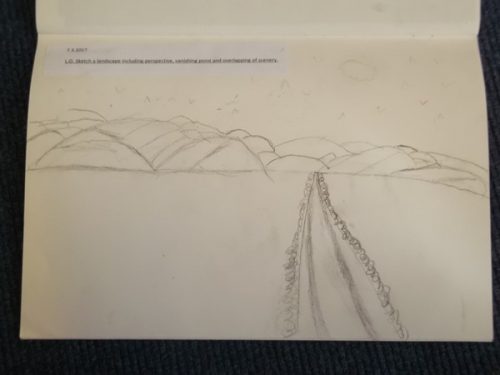 This half term, Robins are learning about landscapes in Art and will also be using watercolours to create wonderful paintings.

The class considered why people find landscapes appealing and shared their ideas and opinions. They also compared examples of work by two landscape artists called David Hockney and Heaton Cooper.

Before using any paint, the class experimented with sketching a horizon, using perspective and creating a vanishing point. Here are some examples by Millie and Abdulbari.

Today, Robins have been learning about being merciful and forgiving. Mrs Parry asked the class if they would like to share a time when they had ever broken anything. She told the class about accidentally dropping one of her mother-in-law’s favourite bowls whilst drying up. The class shared some examples together. 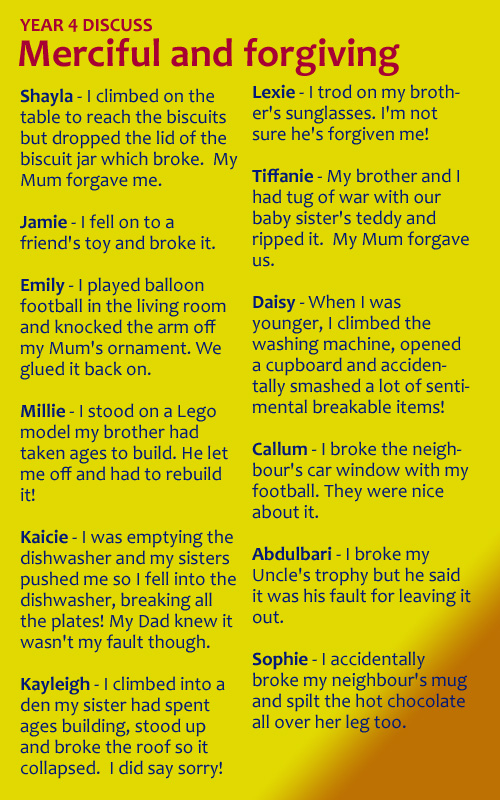 They discussed some things that are broken cannot be mended, but it is often possible to mend things that we have broken. If we care for our environment, it is a very good idea to try to mend things rather than always throwing them away and then buying new things. We talked about how these items could be repaired.

– a hole in the toe of my socks? (needle and thread)
– a ripped page in a book? (sellotape)
– a handle that has come off a mug? (superglue
– a puncture in my bike tyre? (puncture kit)
– a cut finger? (sticking plaster)

Mrs Parry asked the children how to repair a broken relationship and explained how Peter, Jesus’ friend had asked him for help. The children heard the parable that Jesus told Peter, called the unforgiving servant and considered forgiveness as a way of mending broken friendships. 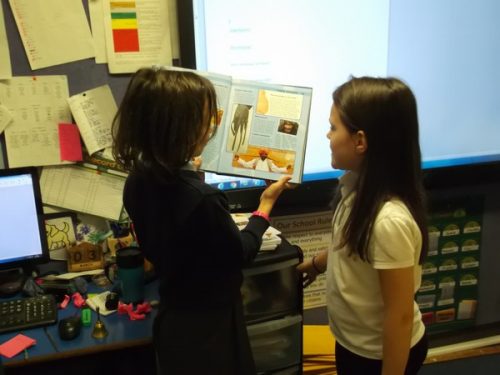 Mrs Parry discussed the importance of reading for pleasure following World Book week. Robins enjoyed having “free choice” and shared their favourite areas of the books with the rest of the class.

Krystal read out a funny joke about a teacher!

Emily shared a funny page using the visualiser so she could show the class the accompanying drawings in the “Diary Of A Wimpy Kid.”

Cara found an awesome fact in her non fiction book about Sikh beards(which we’ve currently been learning about in RE!)

Isaiah – Read his book to the class bear! 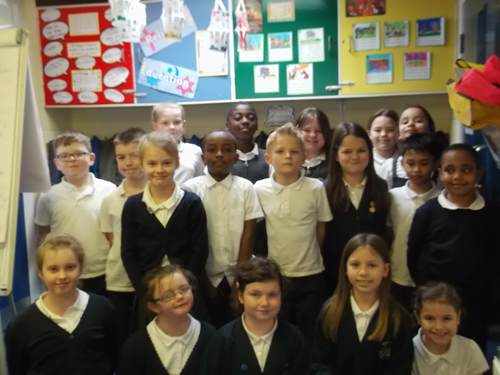 These superstar Robins all completed their number clubs this week: