This week we have been practising our time telling skills. We love ‘Maths Mansion’ so we watched ‘Doing time’. It introduced us to the 12th Elf. We now know that to convert the 12 hour time to 24 we add the magic number 12 to the number of hours.

As it was a beautifully sunny day, we took the lesson outside. Miss Sloman turned the playground into a biome. We learned that this is part of a habitat. Then she placed hoops around. These represented the safe places for prey to hide, like up a tree or in a whole.

The aim of the game was to collect as many bean bags or hoops as possible. These represented food and energy. At the end of the game, anyone with less than 3 was dead as they had starved. This meant the prey needed to leave the safe hoops in order to stay alive. However, in yellow bibs were the predators, the carnivores. If they caught you, they got to keep your ‘energy’. This is to represent the food chain and the chain of energy. After a while, some top predators were added in red bibs. This meant the predators also had to be careful now.

We also learned the importance of habitats. Miss Sloman came along with her ‘chain saw’ and got rid of the trees (hoops). Many more ‘prey’ were caught as they had no safe place to hide. This represented deforestation which we learned about last term. We had an excellent time and learned lots.

In the wake of the general election, the Robins had a more pressing decision to make. Who should rule Britain? Boudicca, the Celtic Queen or Emperor Claudius, the Roman Leader.

We worked on manifestos for both candidates. 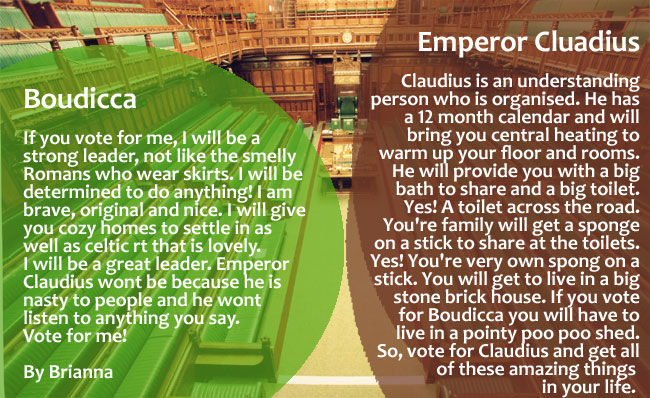 After sharing some wonderful manifestos, we had a class vote.

Boudicca got 10 votes but Emperor Claudius will take control of Britian with his 17 votes.

Our topic for Science this term is ‘Teeth and Eating’. Today, we added to our class display by joining the organs in the digestive system together. We found out about the oesophagus, stomach, small intestine and large intestine. We also added a pair of lungs and a heart to our display.

We found out that the small intestine is by no means small! It is approximately 4 TIMES the length of your body!

We used some display border and measured out Sam 4 times and were amazed to see that his small intestine would stretch across the whole classroom!

We cant wait to learn more about the digestive system!