This afternoon Year 4 took part in a circle time session to discuss our value word for this month which is appreciation. We discussed what this word means to us and also times when we might have shown appreciation. 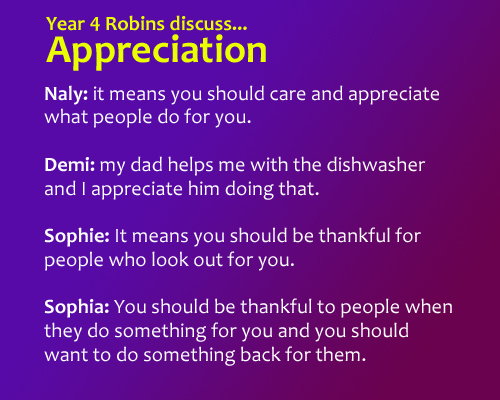 Today we have been looking at our school rules. We have created some still frames of each school rule to try and show what we think it should look like!

This is what we came up with.

1. Behave calmly and safely in and around school. 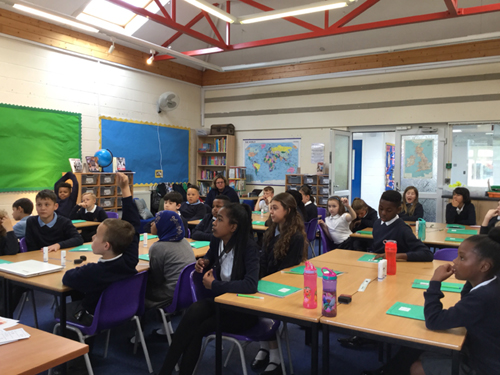 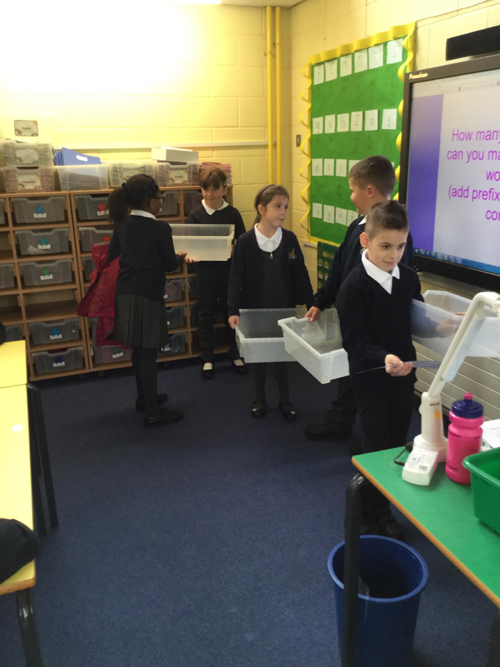 3. Show respect for everything and everyone. 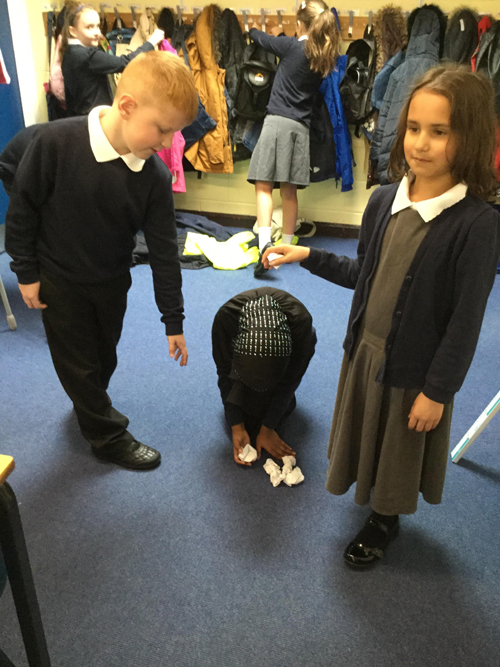 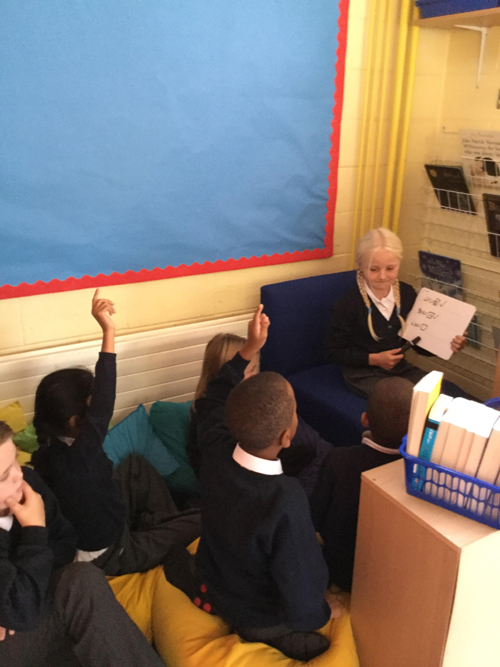 5. Work hard and take pride in what you do. 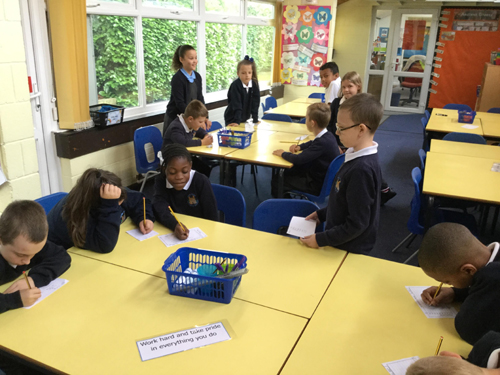 This morning, Robins discussed the value word for this month. They were asked what “RESPECT” means to them: 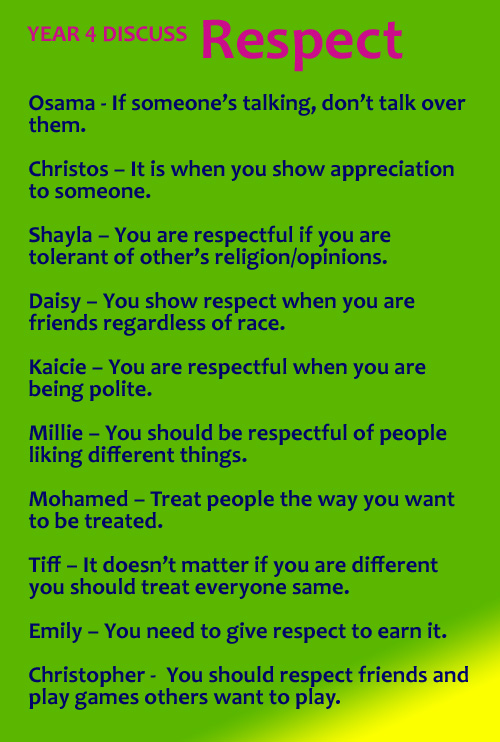 Next the children were asked to think of a time when they have shown?

Kaicie – We respected the gurwarah at the Sikh temple when we removed our shoes and covered out heads.
Daisy – I stood up for someone who was being teased for their skin colour.
Krystal / Abdulbari– We respected the teacher by listening and not talking on the Roman trip.
Shayla – I respected my sister’s choice of icecream.
Osama – We are respectful when we show good listening to Mrs Parry.
Emily – I am respectful when I hold the door open.
Mrs Sargant – Saying please and thank you is being respectful.
Christos – We show respect on Nov 11th for soldiers that gave their lives for us in the war.

Robins today discussed the meaning of courage and shared their fears with one another: 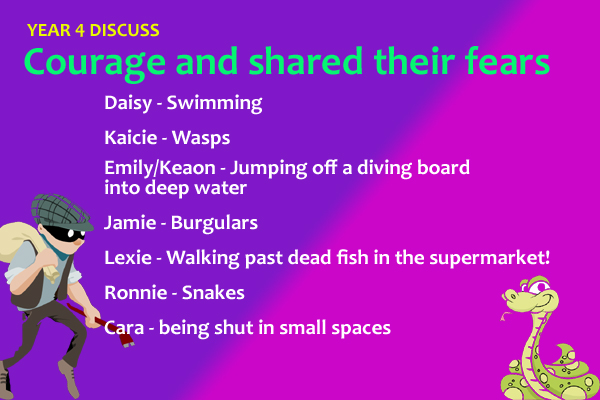 We shared our views and opinions about whether we should avoid things we are scared of or face our fears. Some of the children shared examples of when they had showed courage:

Daisy – Sleeping in the dark
Sophie M – Jumping from a height into a pit of foam pit
Mohamed – Climbing a fence
Osama – Climbing high bars in P.E. Daring to smell the eggs in our science experiment
Jamie – Sliding down a space bowl at the swimming pool – there was a drop at the end
Tiffanie – Sleeping on the floor abroad. I was worried about bugs!
Riley – Crawling through a simulated cave on a Cub Scout camp last weekend

In partners, the class made up a poem entitled “Almost Nothing Scares Me!”

Cara & Sophie:
We wouldn’t be afraid of a dragon or a murderer
We would fight a Roman or a Celt for free
We wouldn’t run away from a tornado or acid rain
but lifts absolutely petrify us!

Robins have been looking at examples of perseverance.

Mrs Parry showed the children footage from the 1992 Olympics in Barcelona when Derek Redmond tore his ham string. He persevered as he was so determined to finish the race. He had been the favourite to finish. His Dad walked part of the way to support him as he was in tremendous pain.

Mrs Sargant showed the children coverage of this year’s London Marathon. The fastest man and woman completed it in just over two hours. Patrick Bardon took five days to finish the 26 mile marathon. He has cerebral palsy and wanted to raise money for the charity.

The symptoms of cerebral palsy aren’t usually obvious just after a baby is born. They normally become noticeable during the first two or three years of a child’s life.

Symptoms can include:
•delays in reaching development milestones – for example, not sitting by eight months or not walking by 18 months
•seeming too stiff or too floppy
•weak arms or legs
•fidgety, jerky or clumsy movements
•random, uncontrolled movements
•walking on tip-toes
•a range of other problems – such as swallowing difficulties, speaking problems, vision problems and learning disabilities

The severity of symptoms can vary significantly. Some people only have minor problems, while others may be severely disabled. 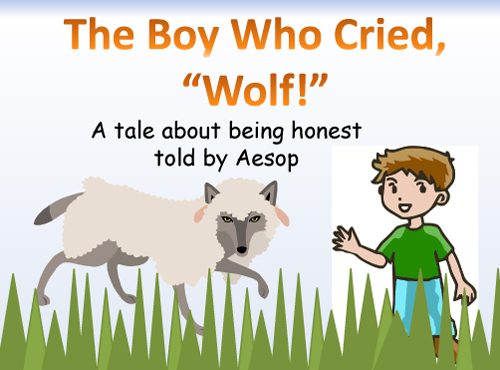 The value word for March is honesty, Mrs Sargant asked in circle time what honesty means to Robins:

Robins then heard the story about ‘The Boy Who Cried Wolf’.

Then Mrs Sargant asked why should you always be honest?

Cara – If you lie all the time no-one will believe you when you’re telling the truth.

Mrs Sargant asked the children to give examples of when they have done something caring. 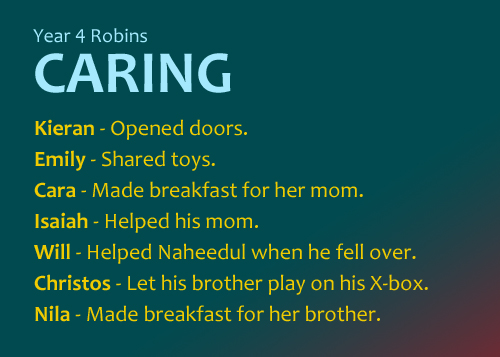 This month’s value word is caring. The class shared times when they have been caring or have seen a good example of it. 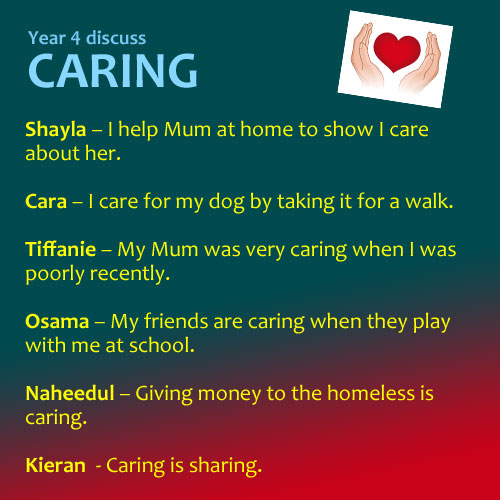 Today in Circle time, Robins discussed their understanding and the meaning of this month’s value word – appreciation. 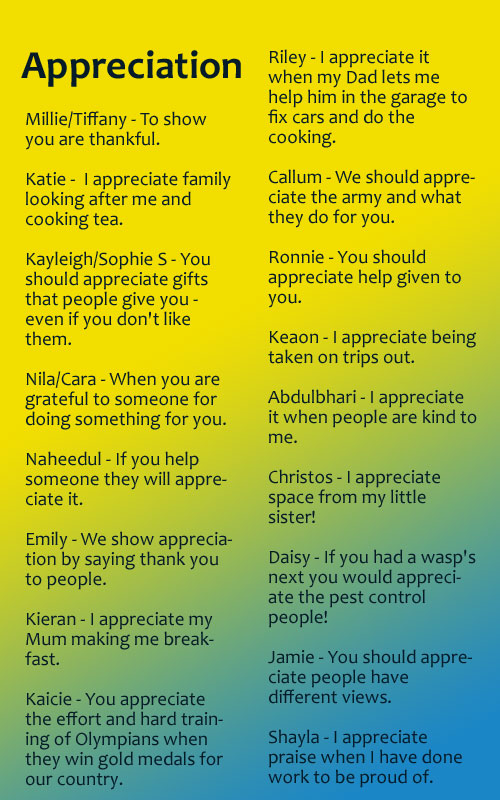 December’s value word is thoughtfulness, So in circle time today Robins were asked if they had been thoughtful this week.

Here are some of the things they said. 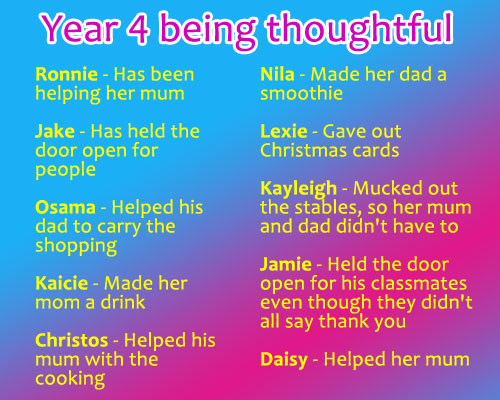